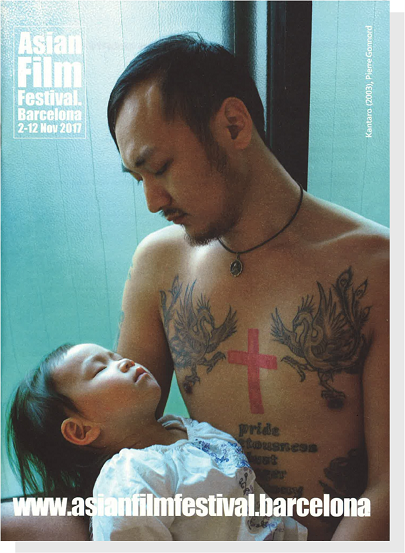 The Asian Film Festival Barcelona | AFFBCN (2017) was raised from a cultural turn of geography, and from the emphasis that critical geography places on the construction of imaginaries that are directly related to the territory, starting from the symbiosis between nation and narration. Asian cinema does not form a uniform set of paradigms or present a unique identity panorama, as shown by the different stories that belong to the countries represented at the festival, from Central Asia, Southeast Asia and even Asia Pacific. This large area comprises the former Soviet republics of Kazakhstan, Tajikistan and Kyrgyzstan; Iran, Afghanistan, Pakistan, Bangladesh, India, Nepal, Sri Lanka, Bhutan, China, Mongolia, Hong Kong, Korea, Japan, Malaysia, Singapore, Cambodia, Myanmar, the Philippines, Thailand, Vietnam, Indonesia, Australia and New Zealand. Within the more than 12,000 km that separate the ends of this great extension from east to west, several geographical and cultural borders of more than twenty countries are crossed, which claim a local identity in defence of difference and against cultural globalization that characterizes the world order. The Festival was divided into six sections: the Official Section, the Panorama Section, the Netpac Section— all of them to competition—, the Discoveries Section, the Special Section, and the “Retrospective” Section, dedicated to the filmmaker Hsiao Hsien-Hou; and also includes a short film program.