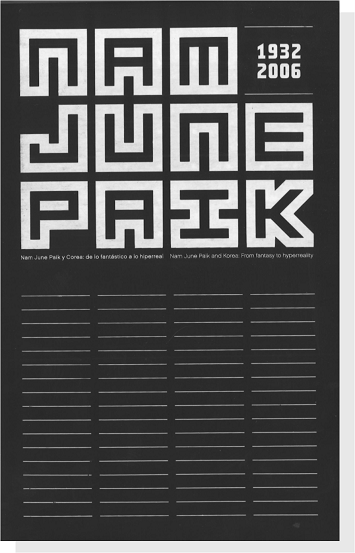 A year after the death of Nam June Paik in 2006, Casa Asia, Fundación Telefónica (Madrid) and Gyeonggi Cultural Foundation (Korea), published this book in honor to Nam June Paik, coinciding with the year of Korea as a guest country in ARCO and the announcement of the aperture of the Nam June Paik Art Center in Korea at the end of 2007. The book gathers texts from several Korean and European specialists of Nam June Paik’s work, that make this book a clear testimony of this artist’s contribution to contemporary art. As suggested by the tittle Nam June Paik and Korea: From Fantasy to Hyperreality, this publication attempts to define the dualistic pattern through which Paik interacted with the reality of his native country. Korea became a symbol of loss for the artist, in space of absence and also as a mythical reality located in a remote time. Paik plays a key role in the creation of the 20th century aesthetic discourse and, as Frederic Jameson said in 1986, he created a “new way of perceiving the difference” which converted him a key player of postmodernity.