“Building a common path” is the motto of the twelfth edition of the Spain-Korea Tribune, which will gather from January 24 to 25 at Casa Asia Headquarters in Barcelona, representatives of civil society, of the public administrations and of the economic and university world of Spain and Korea

The Spain-Korea Tribune is a platform for dialogue and cooperation with the main aim of strengthening bilateral relations in the economic, academic and cultural spheres, as well as exploring opportunities for collaboration and promoting relations between the two civil societies.

This forum is organized by Casa Asia and the Korea Foundation, and in its twelfth edition co-organized by the Hankuk University of Foreing Studies, in collaboration with the Ministry of Foreign Affairs, European Union and Cooperation and the EFE Agency.

The Spanish delegation is headed by the Director-General for North America, Eastern Europe and the Pacific, Ministry of Foreign Affairs, European Union and Cooperation, Ana María Salomón, and by Korean President of the Korean Foundation, Sihyung Lee. General Director for Europe of the Korean Foreign Ministry, Ki-hong Jung, the Spanish ambassador to Korea, Juan Ignacio Morro Villacián, and the Korean to Spain, Chun Hong-jo, and the general director from Casa Asia, David Navarro will attend, among other authorities. 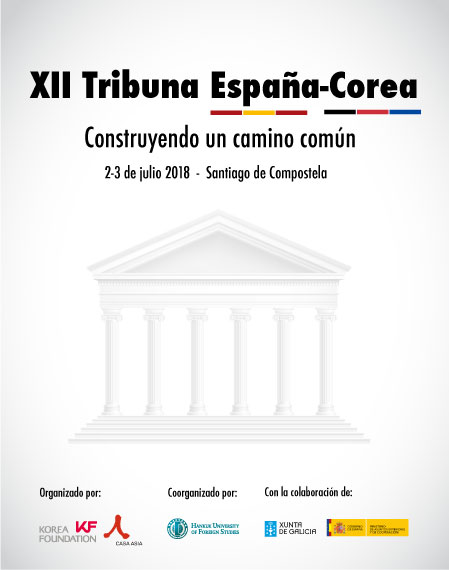 The Tribune this year is structured around 4 sessions that will cover topics of interest to Spain and Korea:

The several sessions attended by representatives of the Institute for the Diversification and Saving of Energy (IDAE), the Chamber of Commerce of Spain, the consultant Haz Energía, the Catalan Institute of Energy, the universities of Barcelona, Malaga and Complutense of Madrid, the Cervantes Institute, the Office of the Inter-University Council of Catalonia, as well as the Spanish Center for Korean Research (CEIC). And from the Korean King Sejong Institute, Seoul National University, Ajou University, Korea Trade-Investment Promotion Agency (Kotra), King Sejong Institute Foundation, and Chung-Ang University.

Coinciding with the celebration of the Spain-Korea Tribune on January 25 in the afternoon, the new Consulate General of Korea will be officially opened on Paseo de Gracia, 103 in Barcelona.